The Significance of Hazard Endpoints in Quantitative Risk Analysis

By
John B. Cornwell and Jeffery D. Marx

The use of quantitative risk analysis (QRA) by private firms and government agencies has increased the past few years. Typically, QRA techniques are used to obtain a better under­standing of the risk posed to people who live or work near hazardous materials facilities, and to aid them in preparing effective emergency response plans.

When conducting a QRA, consequence models are used to predict the size, shape, and orien­tation of hazard zones that could be created by releases of hazardous materials. The hazards of most interest during the QRA of a petroleum or petrochemical facility are toxic vapor clouds, fire radiation, and blast waves. In order to compute the risk associated with each of these hazards, a common measure of their consequences must be used. In public risk assess­ments, the common measure of consequence is typically the impact on humans exposed to each type of hazard. Therefore, the outer limits of the hazard zones predicted by the conse­quence models must be based on a set of modeling endpoints that are expected to produce identical impacts on humans (e.g., 1% mortality).

This paper compares the results of two QRAs conducted on a hydrocracking unit within a refinery. These QRAs were identical except for the endpoints selected for use in the conse­quence models. The individual risk contours and f/N curves generated by the two QRAs are compared to illustrate how the results of a QRA can be affected by the selection of modeling endpoints. Based on this comparison, the following conclusion is clear: industry and govern­ment agencies must agree on the hazard endpoints to be used in a QRA before consequence modeling begins or else the conclusions drawn by each group may be quite different.

Within each of these tasks, there are numerous factors that influence the results of the QRA. Among those factors are the hazard endpoints the risk analyst has chosen to define the boundaries of hazard zones during consequence modeling.

When conducting a QRA, consequence models are used to predict the size, shape, and orientation of hazard zones that could result from hazardous events. The hazards of most interest during the QRA of a petroleum or petrochemical facility are toxic vapor clouds, fires, and explosions. A common measure of their conse­quences must be used to ensure consistency when computing the risk associated with each of these hazards. The measure of consequence typically used in public risk assessments is the impact each hazard has on humans. Thus, in order to be consistent, the boundaries of the hazard zones predicted by the consequence models must be based on hazard endpoints that are expected to produce identical impacts on humans, such as 1% mortality of the exposed population.

If the endpoints are not consistent from one hazard to another, the QRA results may be biased, with one type of hazard appearing to be responsible for more than its “fair share” of the overall risk. Also, if the endpoints for one or more of the hazards are incorrect, the predicted hazard zones will either be larger or smaller than they should be, thereby increasing or decreasing the calculated risk.

The remainder of this paper describes the probits chosen to define the hazard endpoints in a QRA, and illu­strates how the results can be affected by those choices. In order to make this comparison, two QRAs were conducted on a refinery hydrocracking unit (HCU). The two QRAs are identical, except for the endpoints used in the consequence modeling.

The QRAs performed on the HCU involved the evaluation of thousands of potential hazardous material releases. Each potential release may result in one or more of the following hazards.

The physiological effects of an airborne toxic gas depend on the concentration of the toxic gas in the air being inhaled, and the length of time an individual is exposed to this concentration. The combination of concentra­tion and time is referred to as dose. In risk studies that involve toxic gases, probit equations are commonly used to quantify the expected rate of fatalities for the exposed population. Probit equations are based on experimental dose-response data and take the following form.

According to probit equations, all combinations of concentration and time that result in an equal dose also result in equal values for the probit and therefore produce equal expected fatality rates for the exposed popu­lation.

There are several probit equations available for H2S. Two of them are:

Dispersion calculations are often performed assuming a one-hour exposure to the gas. This is particularly true with air pollution studies since these studies are typically concerned with long-term exposures to low concentration levels. For accidental releases of toxic gases, shorter exposure times may be warranted since durations of many accidental releases are less than an hour. In the QRAs, the calculations were performed for various exposure times (and concentration levels), dependent on the duration and nature of the release.

When using a probit equation, the value of the probit that corresponds to a specific dose must be com­pared to a statistical table to determine the expected fatality rate. For example, if = 2.67, the expected fatality rate is 1%. Using the Perry and Articola probit equation given above, the dose that equates to a 1% fatality rate is 158 ppmv for 60 minutes, or 256 ppmv for 30 minutes, or 416 ppmv for 15 minutes, etc., as shown in Table 1. Using the GASCON2 H2S probit yields significantly different H2S concentrations for the same exposure times and mortality levels, as shown in Table 1. Figure 1 presents the same information in graphical form.

Physiological Effects of Exposure to Radiation from Fires

The physiological effects of fire on humans depend on the rate at which heat is transferred from the fire to the person, and the time the person is exposed to the fire. Even short-term exposure to high heat flux levels may be fatal. This situation could occur to persons wearing ordinary clothes who are inside a flammable vapor cloud (defined by the lower flammable limit) when it is ignited. In risk analysis studies, it is common practice to make the simplifying assumption that all persons inside a flammable cloud at the time of ignition are killed and those outside the flammable zone are not [Cox, 1993].

In the event of a torch fire or pool fire, the radiation levels necessary to cause injury to the public must be defined as a function of exposure time. The following probit equation for thermal radiation was developed for the U.S. Coast Guard [Tsao and Perry, 1979].

Table 2 presents the probit results for several exposure times that would be appropriate for torch or pool fires. The graphical forms of the radiation probit equations for different exposure times are presented in Figure 2.

In the event of a vapor cloud explosion, the overpressure levels necessary to cause injury to the public are typically defined as a function of peak overpressure, without regard to exposure time. Persons who are exposed to explosion overpressures have no time to react or take shelter; thus, time does not enter into the

relationship. Work sponsored by the Health and Safety Commission [HSE, 1991] produced the following probit relationship based on peak overpressure.

Although not a probit in the form of those presented earlier in this paper, the Canvey explosion/lethality relationship will be used as a second probit.

Table 3 presents the probit results for 1%, 50%, and 95% fatalities. The graphical form of the explosion pro­bit equation is presented in Figure 3.

For the purposes of this study, the H2S toxicity, fire radiation, flash fire, and explosion overpressure probits were divided into the following groups. The probits in Set #1 were used in one QRA; the second QRA used the probits in Set #2 (see Table 4).

These groupings could be changed since there are no interdependencies among the different probits. Thus, there is the opportunity to have sixteen different sets of H2S/radiation/flash fire/overpressure probits. Since only one flash fire probit was used, the number of possible combinations is reduced to eight. Considering that there are many other probits available, the number of possible combinations is actually much higher.

The following example illustrates how the choice of hazard endpoints can affect the sizes of the potentially fatal hazard zones that could result from a single release. 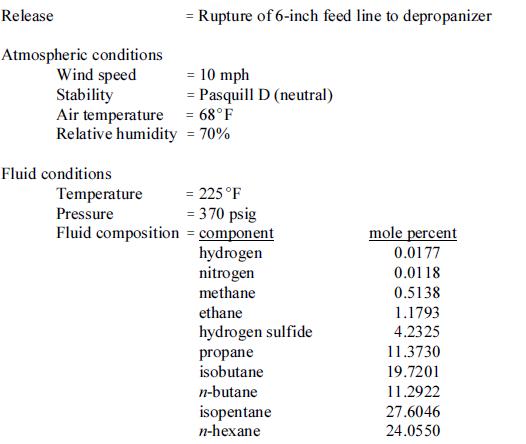 CANARY by Quest® was used to perform consequence modeling calculations to the endpoints defined by the two probit sets. The results of these calculations are summarized in Table 5

As shown in Table 5, probit Set #1 produces larger hazard distances than probit Set #2. The differences may not be large for a single scenario such as this (a single release under a specified wind condition, etc.), but the differences will be compounded within the framework of a QRA study.

Individual Risk Contours for the HCU

When viewing these figures, it is important to note that the risk contours represent the annual risk of being EXPOSED to potentially fatal doses of H2S, radiant heat, or explosion overpressures. If the probability of ignition of flammable vapor clouds is assumed to be independent of population density, the individual risk contours will not be affected by the number of persons living or working in the area around the facility. Thus, a person located on the 1.0 x 106 individual risk contour for one year has one chance in a million of being fatally injured by the hazards associated with releases of hazardous fluids from within the HCU, regardless of how many other persons are located in the same area.

f/N Curves for the HCU

The f/N curve is another method that is commonly used to present the results of a QRA. The f/N curves for both HCU QRAs are shown in Figure 6.

An f/N curve is a cumulative plot of the probability of occurrence and expected number of fatalities for each potential outcome of each release event that is included in the QRA. Thus, for any point on either f/N curve in Figure 6, f represents the annual frequency of N OR MORE persons being fatally injured by the hazards associated with releases of hazardous fluids from within the HCU. Since the expected number of fatalities for any specific incident is influenced by the local population density and distribution, f/N curves represent societal risk rather than individual risk.

This paper compared the results of two QRAs for a hydrocracking unit within a refinery that borders a resi­dential neighborhood. The two QRAs were identical except for the hazard endpoints chosen. Probit relations for the various hazards—toxicity, radiation, and overpressure—were presented and discussed. Two sets of probit relations were chosen for use in the QRAs.

The results of the QRAs show that significant differences in the individual and societal risks associated with the HCU can result by simply choosing different hazard endpoints (i.e., probits). As industry and government turn to QRA studies to aid in the determination of risk acceptability for new and existing facilities, the following conclusion is clear: both must agree on the hazard endpoints to use in a study or the conclusions drawn by each group may be quite different.